Is Khloé Kardashian pregnant? As the reality star talks about her “blessed” life, rumors return that she and husband Lamar Odom are expecting a baby. 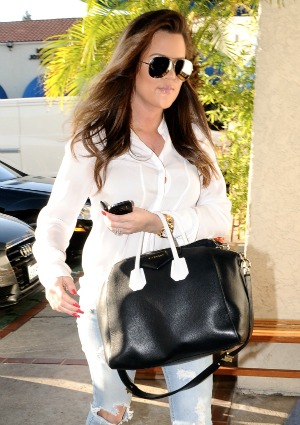 Khloé Kardashian pregnancy rumors continue to spread despite the reality star insisting she’s in no hurry to have a baby with husband Lamar Odom.

As one unnamed source explained to HollywoodLife, “Khloé has put her baby plans on hold for the time being, but [pregnancy is] still on her mind — a lot.”

“She got fired from her hosting show, [she’s had] complications getting pregnant, Lamar’s basketball game was sloppy,” the source elaborated. “Right now the last thing they need to do is [add] another thing to their plate. Instead they’ll just take some time to themselves and recharge.”

However, don’t assume that just because Khloé Kardashian pregnancy rumors are trending on the web that she’s seeing them or hearing about it.

“I don’t get Google alerts,” the 28-year-old recently told the Associated Press. “I don’t need to be alerted to what I’m doing. That’s just my personality.”

She continued, “Once you start living in [that fame world], you can start believing it, and it’s just so bad for you. That’s not the real world. All of this one day will go away no matter who you are, and I need to be OK with who I am as myself and this doesn’t make or break me. This is wonderful and I love this ride but I’m also so blessed without it as well.”

Despite no pregnancy announcement, baby-bump watchers can’t help but notice Mrs. Lamar Odom was spotted leaving Kushiya Sushi on June 3 using one of the best bump-hiding tricks in the celebrity handbook — the oversized bag in front of the midsection!

Photographs like the one above aren’t going to have the Khloé Kardashian pregnancy talk dying down anytime soon.

Do you think Khloé Kardashian will go public with pregnancy news, when the time comes?