Tamar Braxton and her husband, Vincent Herbert, are proud parents of a brand-new baby boy. The 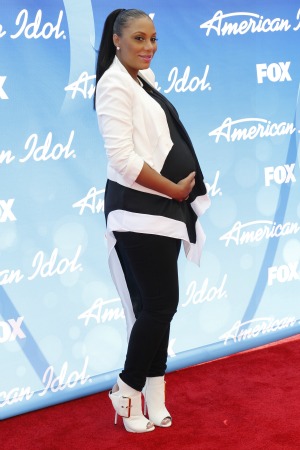 “Love and War” singer made the announcement on Twitter on Thursday, June 6, by posting a picture of three blue teddy bears surrounded by sunflowers and balloons. With the pic, Braxton wrote a simple message, “He’s here!”

No other details about the birth have been released yet, including the little boy’s name. Braxton first announced that she was expecting during a March 13 appearance on Good Morning America. The couple waited until Braxton was already seven months along before announcing due to insecurities caused by previous infertility issues.

“Vince and I [were] told we were going to have fertility problems — it was a lot of information — so we had to get comfortable with the fact that it happened on its own,” Braxton told People at the time. “We decided [not to announce] until we were both really okay with it — that’s why we waited.”

Braxton told Us Weekly at her May 5 baby shower (held at the Bel-Air hotel) that she felt “blessed” to be having a great pregnancy.

“I have a lot of energy. I’m always upbeat and everyone has to tell me to sit down somewhere,” she said. “But I feel amazing!”

Braxton also said that she craved potato chips during her pregnancy and that her famous siblings had been giving her plenty of parenting advice. “I think the one that sticks out the most is be the best mom you can be and always focus on your family first,” Braxton recalled.

The proud papa-to-be told Us he was “elated” to be starting a family with Braxton. “I’m looking forward to just love her more and being a great father to her child,” he said.

The new parents, who were married in 2008, currently star in the WE tv show Tamar & Vince, a spin-off of Braxton Family Values. The second season premieres in September.