Has Kanye West deserted Kim Kardashian during her pregnancy? Her BFF is contradicting a statement by her stepfather. 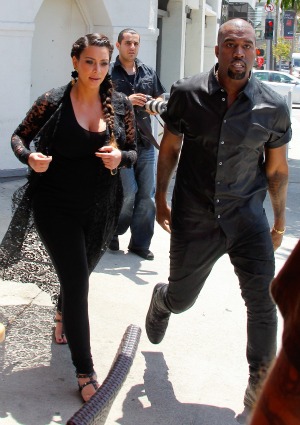 Kim Kardashian’s bestie is crying foul on claims by her stepdad Bruce Jenner that Kanye West is never around for the pregnant star.

Jenner caused a family uproar when he said Kim’s baby daddy was totally MIA, telling Extra, “Actually, I have only met him once. He’s never… he’s not around,” he laughed, adding, “He was in Paris the whole time writing, and he just hasn’t been around.”

Bruce’s son Brody Jenner chimed in that he’s never even met the hip-hop star, quickly adding, “Kim says great things about him. And so does the entire family.”

Now Kim’s BFF Jonathan Cheban, a fixture on Keeping Up with the Kardashians and its various spin-offs, is leaping to Kanye’s defense.

“Kanye is the man,” he told RadarOnline at the Viva Diva wines launch Wednesday night.

“He’s actually always around, I have hung out with them together so many times, I couldn’t even count all the times and in different countries… all those stories make me laugh.”

“He’s so smart and interesting and perfect for Kim,” he added.

Keep up with the Kardashians and all your favorite stars — subscribe to the SheKnows Entertainment newsletter! >>

He also had some harsh words for all the people who have been fat-shaming Kim since she announced her pregnancy.

“I’m sick of the haters,” he said. “Kim will have that body back in two month after having the baby. She’ll be hot, but the haters will still be fat and ugly!”

By the way, TMZ did the research and found that Bruce Jenner has a bad memory. He has hung out with Kanye at least four times: At Kourtney’s baby shower in May 2012, at a taping of The X Factor in November 2012, at a basketball game in December 2012 and at the Kardashian family Christmas party later the same month.